[Excerpted from a speech presented at the Southwest Theatre Conference in November 2003. Reprinted from Spotlight, December 2004.]

It really all started in the early Summer of 1965, when Howard Orms, president of ACTA (now AACT) called me from Tulsa, where he was director of the Tulsa Little Theatre, asking if Midland Community Theatre, in Texas, would like to represent the United States at the Troisieme Festival Mondial du Theatre Amateur...performing a one hour play of our choice in the Monte Carlo Opera House, Monaco!  Without hesitation I said "Yes!  But why me?  Why MCT?”  He said he’d asked several other theatres (I shan’t name them) but they weren’t interested. 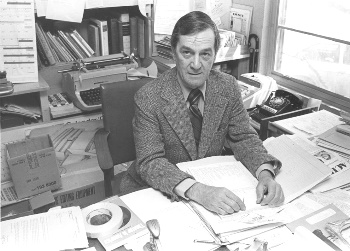 I went to my board and they were less than enthusiastic until I said, "Okay, I’ll do it.”  The Monaco festival, in those years, gave free lodging to a company of ten for three days, along with travel expenses of $1200.  I said, "I’ll find a one act play with a cast of three or four and I’ll find three or four Midlanders ready to pay their own way for the chance to appear in a play in the Monte Carlo Opera House.”  They agreed and pledged to support the entire project.  To be brief, we raised the airfare for a company of ten, took Albee’s The American Dream, and had a wonderful experience.  In all some thirty Midlanders made the trip, paid their own way, of course, and were excellent ambassadors for the United States.  All of which is another story in itself.

On our return flight from France, at 39 or 40,000 feet over the Atlantic, while sipping a martini, before a delightful lunch (remember when flying was a joy), I was thinking back over the entire experience of Monaco...and suddenly I blurted "That’s a lousy way for the United States to be represented in a world event!” There ought to be some sort of qualitative selection process to pick the theatre which will represent the U. S. and then that theatre should not have to pay its way.  But how?  A national festival?  Sure!  I knew nothing about festivals...how to run one.  But I knew something had to be done before the next Monaco Festival in 1969.

I decided to try a West Texas Festival...and in 1966...the next year...we staged it at Midland Community Theatre (MCT).  Theatres came from Hobbs, Amarillo, Odessa, Lubbock, and El Paso.  Performances were limited to one hour...ala Monaco...with a critique following each play.  It worked!  Everyone seemed pleased to show their production, meet and talk theatre, and to see the work of the other theatres.  We all lived within a radius of a few hundred miles but had probably never seen the product of another theatre in that area.

In 1966 this was true of most of the United States. There was virtually no communication between theatres. One could be doing bad theatres, but with nothing to compare to, never know that it was bad, nor understand why audiences were not flocking to one’s productions. The West Texas Festival worked and I learned a lot.

In 1967 I went for a Texas Festival.  I applied and received one of the very first grants given by the Texas Arts Commission.  A Texas Festival of Community Theatre...with traveling money...mileage...for each of the participating Theatres.  And they all came.  The results were very gratifying and...I learned still more.

I had always thought a National Festival should take place in Washington, D. C. at the Kennedy Center for the Performing Arts.  What better place to show off the excellence that did exist among amateur theatres in the U. S. to our congressmen and other sources of funding.  I went to Washington and tried the State Department...international cultural exchange.  Came away with my head bloodied and bowed.  I soon discovered that amateur...or community theatre...was almost a dirty word when it came to raising money.

Commercial airlines seemed another logical source for international exchange funding.  I went to New York...stayed in the old Piccadilly Hotel, worked the better part of a week at it and struck out there too.  I must have been bad luck, for the two airlines that I wooed...Braniff and Pan Am...are long gone.

By now it is 1968, and I’d been elected president of ACTA and my luck with the American Educational Theatre Association, the umbrella organization for ACTA, was much better.  They were launching their national College Theatre Festival and Lewin Goff, their President (and forever high on my list of "good guys”) understood what I was trying to do and he wangled an AETA grant of $2,000 for the project.

By now I had thrown out the proposal to stage the Festival in Washington, D. C., and reasoned that if we couldn’t move theatres across America to a central Festival point...we’d move the Festival to multiple sites across America, making it easier for a theatre to participate. So, all a theatre had to do was join ACTA and get itself to one of the Festival Sites to be considered for a chance to take their production to Monaco, expenses paid.

I rewrote the whole proposal and it was for this plan that AETA contributed the $2,000.  I budgeted their $2,000 to (1) cover the transportation costs of three adjudicators moving to the five sites on five succeeding weekends in May of 1969, (2) a $75 stipend to two adjudicators per weekend, (I would be the third adjudicator, working for free, making sure my idea was executed as planned.) (3) a small expense stipend for each host theatre, and (4) what was left over to go to publicity.

The other item--indeed the missing item in my budget--was the airfare for the winning theatre company of ten people, from their home town to Nice, France.  I was determined that must happen.  It would probably take $5,000, because the airfare from most anywhere in the U. S. to Nice in 1965 for one person, round trip was $500.  True, believe it or not.

Lewin Goff and I were assured by our, then paid executive-secretary in the AETA Washington office, that he could scare up that balance of $5,000 from various sources by the next summer.

I needed a Chairman, I needed the five festival sites, and I needed two other adjudicators!  I asked my friend Jim Cavanaugh, at that time, director of the Omaha Community Playhouse, to act as National Chairman and he agreed.  That was easy.  Finding the five theatres across America willing to host a weekend Festival was not so easy.  It took many letters and many phone calls.  Eventually, ACTA member and friend, Virginia Kirshner, talked the Polka Dot Playhouse in Bridgeport, CT into staging one of them and Virginia acted as Chairman for the New England Theatre Conference.  From out of the blue, came another ACTA member. George Settles, of the Abbeville (SC) Little Theatre, willing to host another Festival for the southeast region.  My friend and director of the San Antonio (TX) Little Theatre, Joe Salek, agreed to stage the third weekend.  Ken & Kay Smith, friends and members of ACTA and the Stockton (CA) Civic Theatre, took on the responsibility of playing host to the West Coast area for a fourth weekend.

For the fifth and final weekend, and to cover the Midwest, we came back to Jim Cavanaugh and the Omaha Community Playhouse, where the Festival would come to a close and the final selection of that theatre and production to represent ACTA and the United States in Monaco in 1969 would be announced.

Cavanaugh and I agreed that Kay Fliehr, ACTA member associated with both the Guthrie Theatre and Theatre-In-The-Round, Minneapolis, should be the feminine member of the adjudication team and she agreed to the chore.

Stepping on the Gas

It was November 1968, while attending the National Theatre Conference in New York, that Jim Cavanaugh and I, on a bitter cold winter night, took the Staten Island Ferry over to visit Norman Nadel, theatre critic and columnist for Scripps-Howard newspapers.  He agreed to serve as the third adjudicator, and it was a very wise choice for through his column, in many newspapers, he provided valuable publicity for the project.

Now:  Fast Forward.  On five consecutive weekends the three of us, Kay, Norm, and I traveled to those five Festival Sites and saw a total of 49 plays.  More than I ever expected.  An average of almost 10 each weekend.  13 in the weekend in San Antonio alone.  One group traveled all the way from near Chicago to Abbeville, South Carolina to be seen, evaluated and considered for Monaco.  Of the 49 plays roughly 1/3 were excellent, 1/3 were acceptable or average, and 1/3 were somewhere between bad and downright terrible.

It is important to note that

To represent ACTA and the United States in Monaco in September 1969, we picked the Entr’actors Guild of Worcester, MA and their production of Arthur Kopit’s Chamber Music.  One of the first plays we had seen five weeks before in Bridgeport, Connecticut.

In June, I called our Executive-Secretary in Washington concerning the balance of the funding, and he reported that he hadn’t gotten around to raising any money.  He said, "I guess you’ll have to call-off sending them to Monaco.”

What to do?  I had promised that the Festival would pay the transportation costs of the selected production for a company of ten.  It was very important to me (and still is) that if selected to be "the belle of the ball,” one should not have to pay for the ball.”

I went to see my friendly banker...a great guy, and a true friend...and told him my sad story, and offered my mortgaged house as collateral on a loan. He said he’d lend me the five thousand without strings.  He did and the Entr’actors went to Monaco where they did an excellent job of representing us.

The word spread throughout ACTA that I was personally on the hook for $5,000 and many friends contributed.  My banker even wrote to his friends asking for help in the banking community, and together these efforts raised several hundred dollars.  I lost more than a little sleep and gaining weight was not a problem as the weeks passed by that Fall.

The Price was Right

One day in November, I got a call from James Hull Miller, writer, theatre designer, technician, former professor of theatre at UNM, and long time friend, commiserating with me and announcing that he was sending me a number of shares of Standard Oil of New Jersey stock (circa 1912) . . . which when sold at the right price would cover the some $4,300 I still owed. I turned them over to my banker who turned them over to his broker. The broker goofed.  He failed to sell at the top price, and we were several hundred short. The broker’s immediate contribution was the last of the many contributions that paid the cost of the first Festival of American Community Theatre.

In short, ACTA, later AACT, was never the same again.