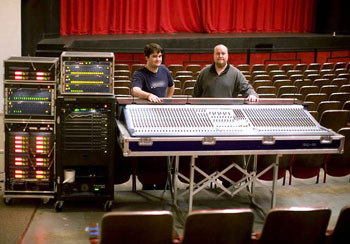 The sound designer plans and provides the sound effects in the play, including music from existing sources. In addition, a composer may write original music for the show. All the music and/or effects in a play considered as a whole make up the "soundscape."

In addition to the sounds of the words spoken by the actors, a play may also call for sound effects to recreate lifelike noises or use music or abstract and unidentifiable sounds to support the drama.

Sound designers and composers begin their work by studying the script, gathering as much information as they can about any sound or music it calls for. As in all other aspects of design, an early meeting with the director and the design team is essential to get a clear understanding of the production concept.

Some directors will already have very clear ideas about what the sound effects and/or music should sound like, while others may request that the sound designer/composer sit in on rehearsals to assist with developing effects and music to fit the specific contexts in which they will be used. Once they have a precise sense of what the production needs out of the music or sound, the composer begins composing the necessary musical pieces and the sound designer begins to gather and create the necessary sounds.

Sounds and music in the theatre can:

The designer or composer combines and varies the five controllable properties of sound to create unique effects or music required by the production of the play.

Sound and music cues are often dependent on the precise timing of the onstage action and can only be set after the play's blocking has been determined. Ideally, the director, cast and crew will have several opportunities to fine tune the timing of the completed music/sound design during technical rehearsals.

Technology provides the tools for a sound designer's work, and since the technology changes and improves--often rapidly--over time, the Sound Designer must also work to stay abreast of these changes.  Improvements in technology can often simplify the designer's workload, as well as provide new methods for creating effective soundscapes for productions. Two good places to begin are the Association of Sound Designers and The Starving Theatre Artist's Sound Design page

The sound designer will meet with the director and the design team (set, costume, lighting and sound designers), to discuss the details of the set and the director's interpretation of the play. The set, costume and lighting designers also meet and work together to ensure the creation of a unified look and feel for the production. A lively exchange of initial ideas and first impressions helps clarify the steps that each person needs to take in this intensely collaborative process.

Once the show opens, the designer's work is essentially complete. Now it's normally the job of the stage manager and sound crew to make sure that every aspect of the production runs just as the designer intended, time after time, until the production closes.

Sound Engineer
The sound engineer works under the designer, and must take the sound design and ensure that it can be created in a given space. This involves selecting equipment to reproduce the various sound elements required, installing and testing it, and usually running the actual show.