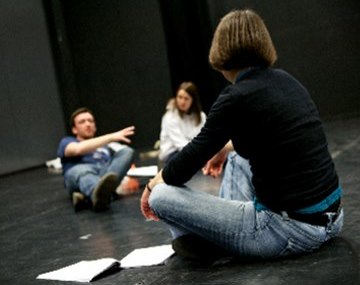 The director has the challenging task of bringing together the many complex pieces of a production—the script, actors, set, costuming, lighting and sound and music—into a unified whole. To accomplish this task, a director needs to:

The director’s work is most often based on a detailed study and analysis of the script to be produced. Many careful readings of the script help the director develop an individual vision of the playwright’s intentions, which will form the core of his or her interpretation. This sense of “what the play is really about” will shape a director’s thinking about every other aspect of the production.

Directors also study the characters in the script, gathering as much information as they can about their physical and psychological traits. This is vital preparation for casting, when the actors who are best able to bring the characters to life in performance need to be chosen.

The director’s initial meetings with the production manager, costume designer, set designer and lighting designer typify the creative collaboration vital to theatre. Any notes the director has made on the technical needs in the script are shared with the designers. The free flow of ideas that takes place here will further refine the director’s vision of the production as a whole.

Details in the script about the specific locale(s) in which the action takes place need to be attended to early in the production process, because they will determine both the basic requirements of the set and the possible movement of the actors on stage. Acting areas, entrances and exits, and furniture and props called for in the script or desired by the director will need to be a part of the set design.

The floor plan can then be sketched out. The floor plan is a basic outline drawing of the stage setting as it would look from above. It is an essential rehearsal planning tool because it allows a director to work out the blocking of the play. Blocking (or staging) is the precise moment-by-moment movement and grouping of actors on stage.

The director’s creative collaboration continues during his or her work with the actors in rehearsals. The actors will bring their own interpretations to the project and perhaps inspire the director to rethink his or her interpretation. They will work closely together to breathe life into the lines and develop a deeper understanding of the characters’ motivations and relationships, fleshing out the subtext of the play. Later the focus of the director’s work in rehearsals will broaden to the overall look and feel of the whole production as transitions between scenes are smoothed out, effective pacing is achieved and all the design and technical aspects of the production are integrated.