Announced by AACT, and presented locally, AACT's Spotlight Award allows member theatres across the nation to recognize special local achievement. Any individual, organization or company is eligible. Nominations are accepted for persons of all ages. Awards may be presented anytime through the year that is appropriate. This is a fitting tribute to the hardworking volunteers, staff, and patrons of local community theatre groups--an AACT tradition and service since 2000. 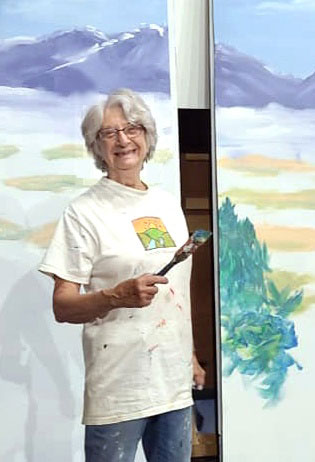 The Lincoln County Community Theater (LCCT), in Damariscotta, Maine, has honored Mary Sue Weeks of Bremen, Maine, with the AACT Spotlight Award for her contributions to the artistic life of the theatre. An accomplished scenic artist, Mary Sue has shared her considerable talents with the company for over a decade.

John Mulcahy, LCCT Production Supervisor, says “From the moment she walked through the door of our theater, we have not mounted a production that has not been blessed with Mary Sue’s incredible skills, tireless work ethic, and friendly demeanor.” He recalls that “when we wanted to show a giant IBM Selectric typewriter on the upstage drop for Nine to Five—a little research and it was done. Paint a drop and false proscenium in the style of Rousseau for Iolanthe?—she mastered it.”

Weeks plays a particularly important role in brainstorming discussions in the early stages of the design process, which Mulcahy says “never seems to be about individual egos colliding, but rather about comrades weighing different ideas and happily arriving at the best plan for moving ahead. Every community theatre should be as lucky as we are to have a someone like Mary Sue Weeks among its dedicated volunteers.”

SGT. Sinlao and Mr. Ortiz were honored for countless volunteer hours, dedication, and devotion to supporting and creating community theatre for U.S. Army Garrison (USAG) Italy, Installation Manage­ment Command-Europe, and AACT. “Your Soldiers' Theatre family appreciates all you do and celebrates this amazing honor with you,” said Jerry Brees, Entertainment Director at Soldier’s Theatre in Italy, which is a member of AACT.

SGT. Martin Sinlao has made a tre­mendous impact on Soldiers’ Theatre and the U.S. Army Entertainment Program. Soldiers are typically only assigned to USAG-Italy for a short time, and Martin has devoted all of it to making Soldiers’ Theatre a success. In only three years he has contributed 1569 vol­unteer hours to the program. Martin is also seen as a talented actor, dancer, and singer, participating in many roles during his time in Italy.

Perhaps more importantly, Martin serves as a choreographer and stage manager, and has improved not only the quality of productions, but significantly increased the morale and spirit of each production’s cast and crew. Company members say he has been instrumental in producing that spark of passion, excitement, and joy that has changed lives for many volunteers.

In addition, he has built sets, constructed props, helped with cos­tumes and makeup, worked backstage and in the technical booth, tended bar, handed out programs, and assisted with marketing and advertising. He has been recognized with acting awards in the IMCOM-Europe Festival of One Act Plays, AACT Region X, and TOPPERS, as well as nominations for his creative choreography in musicals at Soldiers’ Theatre.

Additionally, Martin has supported the program by being a staunch advocate in the community to bring in young, single soldiers, and encourage their participation. His nomination papers emphasize how his mentorship, personality, and enthusiasm has been instrumental in relieving stress, giving soldiers a safe space, and encouraging them to learn, grow, and pursue their dreams in the arts. Several soldiers have since become active members of the theatre family after being intro­duced to Soldiers’ Theatre by Martin.

Alphonso Ortiz has been extremely active in the U.S. Army Entertainment Pro­gram at Soldiers’ Theatre for the past eight years, contributing 1707 volunteer hours to the theatre program. Through a variety of activities, volunteerism, and support, Al has volunteered and participated in musical and theatrical productions, special events, and programs at the theatre—nights, week­ends, and holidays for rehearsals and special events.

A talented volunteer performer, which requires countless hours of rehearsal, preparation, and performance, Al also serves behind the scenes in construction, design, and building sets, as well as the organization and storage of set pieces and props. He is known as a leading advocate for the Entertainment Program in the community.

In addition to his many talents, qualities, contributions, and unique assets, his nomination papers cite his most valued contribution as his support, encouragement, and dedication to making each play, musi­cal, event, or program a success. In particular, he has been praised for his work in marketing and advertising and his work in the IMCOM-Europe Festival of One Act Plays, AACT Region X, and TOPPER competitions through the years.

“Due to his many years of service and continued support, Soldiers' Theatre is successful in accomplishing our mission,” says Entertainment Director Jerry Brees. "Alphonso Ortiz is truly a dedicated and valued volunteer, and helps ensure that the U.S. Army Entertainment program remains vital to our command, volunteers, patrons and staff.”