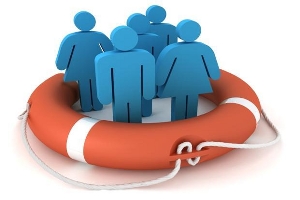 Directors and Officers Liability Insurance—known as D&O insurance—covers directors and officers for claims made against them while serving on a board of directors and/or as an officer. D&O pays for what is often stated as "Any actual or alleged act or omission, error, misstatement, misleading statement, neglect or breach of duty by an insured person in the discharge of his/her duties."  In effect, the policies function as "management errors and omissions liability insurance," covering claims resulting from managerial decisions that have adverse financial consequences.

Examples of claims under D&O include:

Note that D&O does not pay for bodily injury or property damage. Companies should purchase auto insurance, workers' compensation, and general liability to cover such claims.

There are state and federal immunity laws protecting volunteers, which can also provide protection to board members. However, many federal laws, such as civil rights laws and employment laws, are exempted from the immunity statutes. In general, immunity laws are not broad enough to take care of all of your potential liabilities while serving on a board.

As there are no standard D&O policies, each policy and proposal must be evaluated on its own merits. It’s part of the challenge of this line of insurance. Here are some of the factors to consider, according to Scott Simmonds, who consults on insurance for business, municipalities, and nonprofits.

Claims-Made Coverage: Most liability insurance policies (general liability, automobile, workers' compensation) pay for events that occur during the policy period. For example, an auto insurance policy will pay for an accident that occurs while the policy is in force D&O policies, however, pay for lawsuits filed during the policy period; the wrongful act could have occurred years before. An occurrence policy pays based on the date of the accident or occurrence. Claims-made policies respond only when a suit is filed, or when a strong threat of a suit exists. The downside of a claims-made policy comes if the policy is canceled. For example, a D&O policy is put in force. Three years later, however, the organization decides to end the coverage because the premium has increased. Six months later, a letter from an attorney announces a lawsuit for discrimination that occurred in two years earlier. Although the policy was in force at the time of the alleged discrimination, the policy was not in force when the suit was filed. The solution to this problem, if you decide to cancel the insurance, make sureyou have extended reporting coverage, provided for claims made and reported after the expiration of a claims–made policy. (see next paragraph).

Extended Reporting Period/Tail Issues: Most D&O policies only provide protection for lawsuits and actions brought during the period when the policy was in place. In the event that coverage is replaced or cancelled, protection may be desired for events that took place prior to expiration/cancellation, but for which no claim has yet been filed. This coverage is called a "tail" or "extended reporting period" (ERP).

Policy Limit: What amount of coverage is provided by your policy? What's the total amount of protection offered for all claims during the covered time frame (also known as an "aggregate limit")? Multiple claims can, in effect, use up the limit of coverage.

Defense within Limit: Most D&O policies include the cost of defending a claim (attorneys' fees, etc.) within the policy limit of liability. That means that the amount of coverage purchased must be enough to cover the awards and the defense costs of all claims. This can be an issue when considering the amount of coverage to buy.

Retroactive Date: Claims-made policies respond to claims brought during the policy period. Many policies include a date after which a claim must occur in order for the policy to respond – a retroactive date. When changing insurance companies, it is vital to understand the new policy’s retroactive date. The use of a "Tail" may be necessary if the retroactive date is not sufficiently in the past.

Employment-Related Practices Issue: The most common claim for a nonprofit is for employment-related practices – wrongful discharge, harassment, discrimination, etc. Check the policy's definition of "wrongful employment act." Does it include only certain acts, such as sexual harassment? Or is the coverage broad, including workplace harassment, for example? Does it cover discrimination suits brought by third parties? By including employment practices claims in your organization's D&O policy, you could affect the limit of liability available for other claims.