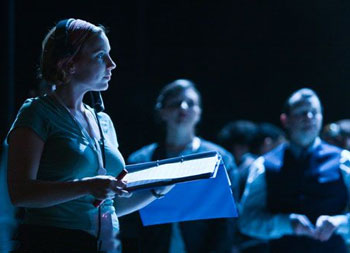 Stage managers typically provide practical and organizational support to the director, actors, designers, stage crew and technicians throughout the production process. They also are the director's representative during performances, making sure that the production runs smoothly.

Stage managers have several key responsibilities and tasks to perform in each phase of a production, including:

In conjunction with the director, the stage manager determines the scheduling of all rehearsals and makes sure everyone involved is notified of rehearsal times, meetings, costume/wig fittings and coaching sessions. During the rehearsal phase, stage managers also:

In rehearsals the stage manager also records all blocking, plus all the light, sound and set change cues, in a master copy of the script called the prompt book. The information in the prompt book also allows the stage manager to run the technical rehearsals, calling each technical cue in turn to determine precisely how it needs to be timed to coordinate with the onstage action.

The stage manager and the technical director also work out a smooth and efficient plan for the stage crew to follow during set changes. Furniture and prop plans for complicated sets are drawn up by the stage manager and technical designer to show exactly where the furniture and props are to be positioned on stage at the beginning of each scene and sometimes in the wings.

Often needed in larger productions, when the stage manager is out in the house,  the ASM is often stationed just offstage to facilitate communication between the stage manager, crew and actors, as well as ensuring safety. The ASM often helps with complex set changes, quick changes offstage, or preparing the stage for performance.