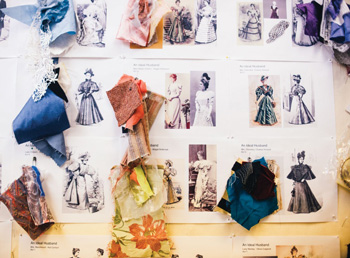 Costume designers create the look of each character by designing clothes and accessories the actors will wear in performance. Depending on their style and complexity, costumes may be made, bought, revamped out of existing stock or rented.

The shapes, colors and textures that a designer chooses make an immediate and powerful visual statement to the audience. Creative collaboration among the costume designer, the director and the set and lighting designers ensures that the costumes are smoothly integrated into the production as a whole.

Stage costumes can provide audiences with information about a character's occupation, social status, gender, age, sense of style and tendencies towards conformity or individualism. As well, costumes can:

Costume designs also need to include any accessories such as canes, hats, gloves, shoes, jewelry or masks. These costume props add a great deal of visual interest to the overall costume design. They are often the items that truly distinguish one character from another.

Costume designers begin their work by reading the script to be produced. If the production is set in a specific historical era, the fashions of this period will need to be researched. To stimulate the flow of ideas at the first meeting with the director and the design team (set, costume, lighting and sound designers), the costume designer may want to present a few rough costume sketches. This is also an appropriate time to check with the director on the exact number of characters needing costumes, as any non-speaking characters the director plans to include may not have been listed in the script.

It is the costume designer's responsibility to draw up the costume plot. The costume plot is a list or chart that shows which characters appear in each scene, what they are wearing and their overall movement throughout the play. This helps track the specific costume needs of every character. It can also identify any potential costume challenges, such as very quick changes between scenes.

When the director and production team have approved the costume designer's preliminary sketches, she or he can draw up the final costume designs. The final designs are done in full color. They show the style, silhouette, textures, accessories and unique features of each costume.

Once the show opens, the designer's work is essentially complete. Now it's normally the job of a wardrobe assistant to make sure that every aspect of the production runs just as the designer intended, time after time, until the production closes.