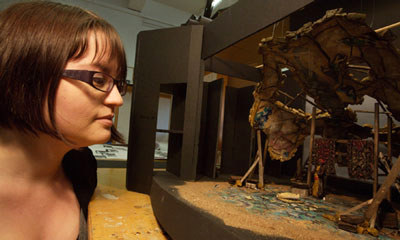 All the scenery, furniture and props the audience sees at a production of a play make up the set design. The set designer's job is to design these physical surroundings in which the action will take place.

A theatre set should: (1) suggest the style and tone of the whole production; (2) create mood and atmosphere; (3) give clues as to the specific time and place of the action; and (4) offer creative possibilities for the movement and grouping of the actors.

The set may also need to be designed so the backstage areas used by the actors and stage crew are kept out of sight from the audience. This will depend on the effect the director wants to create with the staging and on the type of stage the production uses.

All the things appearing on the stage other than the scenery are called stage properties, or props. Set props like furniture, draperies and decorations are the types of things that complete the set and they need to be part of the set design.

The set designer will normally read the script many times, both to get a feel for the flavor and spirit of the script and to list its specific requirements for scenery, furnishings and props. The time of day, location, season, historical period and any set changes called for in the script are noted. The set designer's focus here is on figuring out everything that may be needed based on the dialogue in the script. Stage directions tend to be ignored at this point in the process.

Set designers use several tools to communicate their ideas to the director and the other designers. These include:

These visual aids help to ensure that all the theatre artists involved in the production understand each other.

Once the show opens, the designer's work is essentially complete. Now it's normally the job of the stage manager and backstage crew to make sure that every aspect of the production runs just as the designer intended, time after time, until the production closes.

The set designer will meet with the director and the design team (set, costume, lighting and sound designers),  to discuss the details of the set and the director's interpretation of the play. The set, costume and lighting designers also meet and work together to ensure the creation of a unified look and feel for the production. A lively exchange of initial ideas and first impressions helps clarify the steps that each person needs to take in this intensely collaborative process.

Master Carpenter
The master carpenter's job takes the working drawings and uses them to build the set. After a quick glance at the working drawings, the MC should be able to schedule the build, order lumber, and then just pass that information on to the crew chief and Technical Director, who make sure that the carpenters are there at the appropriate times. In many theatres, these duties having been absorbed into the Technical Director position. If your show can come up with a master carpenter, use them wisely.

Master Painter
A highly sought skill in most theatres, the MP is responsible for painting set elements under the direction of the set designer, but often the Master Painter has the freedom to choose many of the design elements him/herself.

Carpenters/Electricians
When sets need to be built or lights hung, shows need carpenters and electricians to do the grunt work of sawing, hammering, lifting, hanging. In many companies, no experience is necessary to serve in one of these roles as you will be taught on the job. Often, actors serve in these roles when they aren't needed in rehearsal.